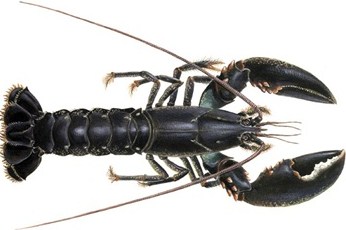 Lobster is the most economically important species to commercial fishers within the NIFCA district. The species was traditionally fished in the summer months, but is now fished throughout the year.

Habitat: Live in holes, burrow or crevices of preferable hard rocky substrate or hard mud on the continental shelf up to 150m depth.

Diet: Mostly feed at night on benthic invertebrates, including crabs, molluscs, and starfish.

Life cycle: Mating occurs throughout the year. The female carries thousands of small eggs (up to 40,000 at one time!) for close to a year before they hatch into planktonic larvae. The Lobster Hatchery in Amble take berried (term for egg bearing) hens (a dispensation is required) caught locally and provide ideal conditions for the eggs to hatch and grow. The young lobsters are then returned to the sea after a period of time being raised in the hatchery in an effort to sustain future lobster stocks. As the lobster grows it passes through numerous moult stages and reaches sexual maturity at around 6 years.

Other Species in the NIFCA District