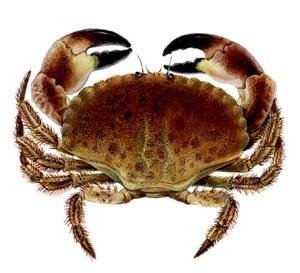 A common large crab species that can be identified by its pie-crust edge, orange-brown colour, and black tipped pincers. Whilst not the most important economically, it is the highest catch by weight within the NIFCA district. Historically, brown crab was caught as a bycatch species from the lobster fishery, however emerging markets in Asia have increased the value and fishers now target crab over the winter period.

Habitat: Found in all areas of the district, preferring rocky ground, particularly under boulders, and on mixed coarse, and muddy sand sediment. They range in depth from the intertidal to 100m.

Diet: Feed on a variety of molluscs, crustaceans, and echinoderms as well as carrion on the seabed.

Life cycle: Mating occurs after moulting in the summer months. The female berried crab migrates to offshore areas carrying her eggs where the sediment is soft and she can burrow to brood them. Juveniles and males tend to remain inshore all year round. Once the eggs hatch (August – October) they get carried by sea currents while growing through different pelagic larval stages. As juveniles, the crabs settle on the seabed and reach sexual maturity at around 5 years.

NIFCA district & management: Edible crabs are collected recreationally and commercially in the district. They are subject to a minimum carapace width of 130mm. Prohibitions also include no edible crab to be taken if soft shelled, berried or detached. More information on recreational and commercial shellfish permits can be found HERE.

Other Species in the NIFCA District