The case was brought against Mr Priestley by NIFCA who manage the inshore fishery along the Northumberland and North Tyneside coastline.

Andrew Oliver of Andrew Jackson Solicitors prosecuting on behalf of NIFCA, informed the court that on the 25th of February 2022 Mr Priestley, the owner and master of the fishing vessel Mary May BK140, landed his catch at Seahouses harbour. Fisheries Officers inspecting the catch found a number of prohibited shellfish or their commercially valuable parts, including from sections of the catch that the crew had concealed from officers during their initial inspection.

Mr Oliver explained to the court that the offences found were of an environmental nature, breaching national and local legislation created to protect fish stocks and to gather accurate information to aid fisheries management.

Mr Priestley who was represented by Stuart Athey of Hadaway and Hadaway Solicitors pleaded guilty to all four offences.

After taking into consideration Mr Priestley’s early guilty plea, the court-imposed penalties of £615 for the negligent landing of the egg bearing Lobsters. £3,076 for the deliberate landing of parts of Lobsters. £3,076 for the deliberate landing of detached crab claws and £3,076 for failing to send accurate information to NIFCA. A victim surcharge of £190 and costs of £2,914.88 were also awarded. In total Mr Priestley was ordered to pay £12,947.88 for committing these offences.

Nick Weir, Lead Enforcement officer for NIFCA, said: “The Authority is pleased that the court recognises the importance of the national fisheries legislation and NIFCA byelaws that are essential for protecting the commercially sensitive stocks in our district.

“The protection of juvenile shellfish, breeding stocks and the accurate reporting of catch and effort are crucial to the fishery and NIFCA will vigorously pursue any individual or company that disregards regulations. Fishing for shellfish in Northumberland is vitally important to commercial fishers who currently have well documented and publicised pressures on their industry, especially around the Farne Islands and Holy Island where Mr Priestley fishes.

“At a time of unparalleled cooperation and understanding between fishers and the Authority, NIFCA will do everything in its power to prevent both ecological harm and reputational damage in an area where the very future of the fishing industry could be at stake.

“NIFCA is confident that this case is an anomaly, in a well-managed and enforced area and should not tarnish the reputation or future of the local industry. Fishing in Northumberland is an economically sensitive activity and of great social importance to our local heritage and character. Our Byelaws balance the social, environmental and economic needs of our stakeholders to promote healthy seas, sustainable fishing and a viable industry.” 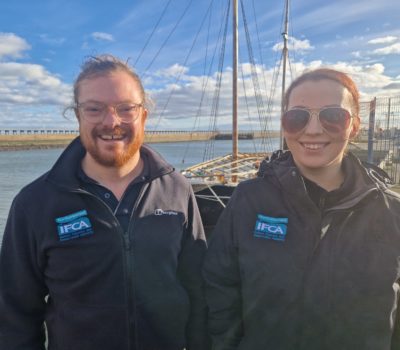 Northumberland Inshore Fisheries and Conservation Authority (NIFCA) has appointed two new enforcement officers this year to its enforcement team. The organisation, which is based...

The NIFCA Office will be closed on Thursday 24th November 2022 due to staff training.  The office will re-open as normal on Friday 25th...

Northumberland Inshore Fisheries and Conservation Authority (NIFCA) has successfully prosecuted a recreational shellfish gatherer for breaching one if its byelaws. On the 10th of...

We are really pleased to share with you our 2021-22 Annual Report We hope you find it to be an interesting read.